High quality is just the beginning

Fertile agricultural land, world-class manufacturing facilities, efficient transportation networks and a robust research and development (R&D) ecosystem have helped Ontario to be amongst the top agri-food clusters in North America.

Here’s why buyers are hungry for our food products:

Ontario’s over $37 billion agri-food industry starts with 49,000 farms, including more than 700 certified organic farms. They produce more than 200 commodities that feed the supply chains of 4,000 food and beverage manufacturers.

Exports – everything from meat and vegetables to beverages and baked goods – reached $14.8 billion in 2016, a 5 per cent increase over the previous year. 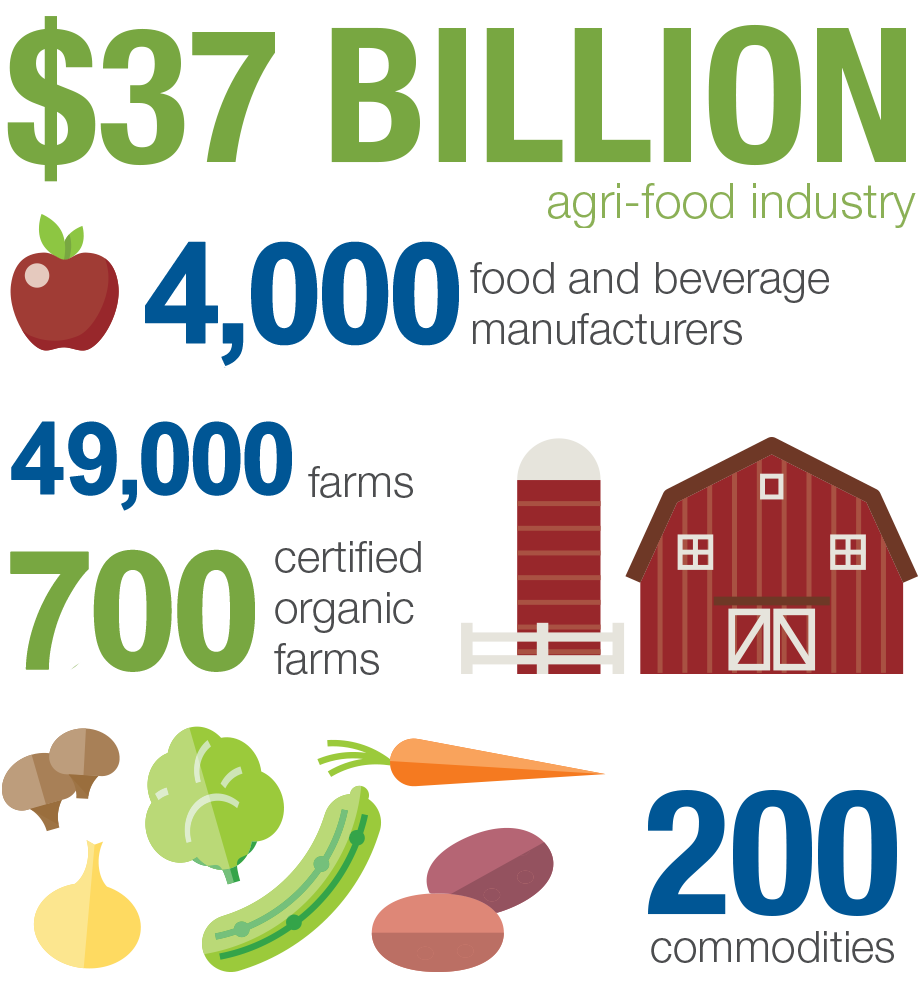 A recent study ranked Canada first among 17 Organisation for Economic Co-operation and Development (OECD) countries on food safety performance. Our province also has programs that help food processors around the world with services in food safety training, consulting and auditing.

Raw materials can cost less in Ontario. As an example, sugar prices in the U.S., Europe and Japan are two to three times higher than in Canada. Cocoa is another example. Canada has no import restrictions or tariffs on cocoa, which can cut costs further. Additionally, the current exchange rate for the Canadian dollar against many major currencies favours international buyers.

For off-shore buyers, more than a dozen cargo airlines and 75 passenger airlines operate from Toronto’s Pearson airport, connecting Ontario suppliers to customers in more than 180 destinations around the world.

Private labelling is winning market share worldwide. In Canada, private-labelled products represent over 30% of all frozen food products sold. Ontario companies supply a wide array of private-label products to both domestic and international buyers, each one customized to meet specific needs.

Ontario is where the McIntosh apple, the Yukon Gold potato and Pablum cereal originated. Orchard researchers are investigating the adaptability of hardy hazelnut cultivars to Ontario’s winter conditions and various pest management challenges, in response to growing demand from local confectionary manufacturers and fresh markets. Today, the province is home to one of North America’s largest concentrations of expertise in food R&D that helps Ontario producers and their international customers capture new markets, increase operating efficiencies and capitalize on the latest food trends.

Ontario, Canada is Open for Business. The province participates in many industry events promoting trade with the rest of the world. Our goods and services have earned reputations for high quality and reliability among customers worldwide.

Connect with our offices worldwide